"Submit a piece of software that utilizes game data
from the Ultra Rapid Fire game mode." 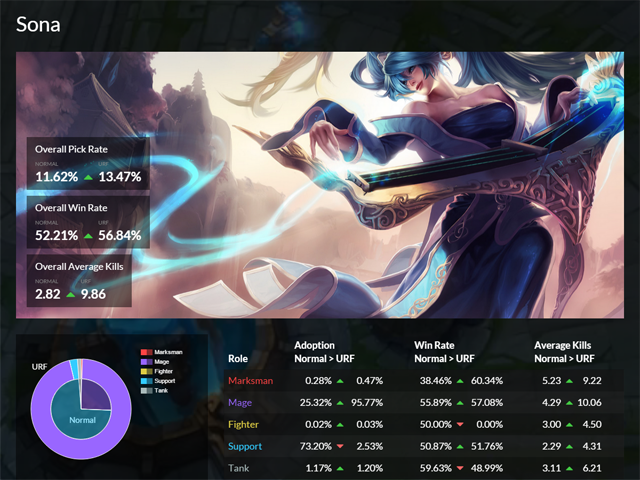 As you might imagine, we received more than a couple entries that were focused on providing stats focused around URF mode. URF Play Styles took URF stats even further by comparing the differences between URF games and Normal games. Perhaps the most impressive aspect of URF Play Styles was how the developer decided to determined the roles of champions in the URF meta. URF mode is unlike any other mode in League of Legends and required a new approach. URF Play Styles used machine learning to determine roles by the items that the champion purchased. You can read more about how the developer accomplished this on the site’s About page. 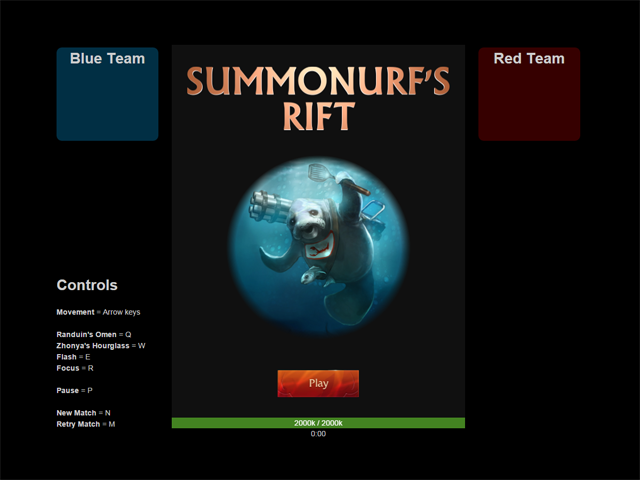 The developers of Summonurf’s Rift decided to utilize URF data to create an experience that might only be possible with data gathered from URF mode. In a unique and creative twist, Summonurf’s Rift is a game where the player is thrown into a gauntlet of “abilities” that represent kills and assists in a real URF game. Because the game is created through a systematic generation of obstacles based on events in the game this experience can be recreated and shared amongst friends which is why we chose Summonurf’s Rift as one of the runner-up entries in the API Challenge. Here are some of our favorites that we’ve affectionately titled Udyr Pls and Lux OP 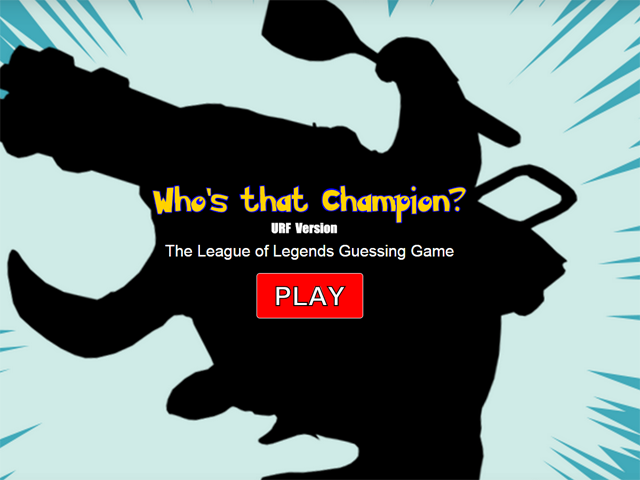 Who's that Champion? By Rithms (NA)

Lastly but by no means the least, we chose Who’s That Champion as a runner-up because it creatively capitalized on the unconventional style of URF mode. This game presents players with an item build and the order in which skills were leveled for an champion in a specific game. It’s the player’s job to try and determine which champion in the game matched these clues. Because it was URF mode, champions were often built and leveled in ways that no one could have expected. We found this game to be extremely engaging in a group and we admittedly spent a good chunk of time playing Who’s That Champion, as pods of Rioters lost many an hour clustered around a monitor enthusiastically arguing what to pick. "Just one more..." was said more than a few times!

There are entries which catch our eye because of their unique execution in a particular aspect of the competition. Here are some of those entries:

Sjokz to the System By Ultra Deluxe (NA) and dajuicebaby (NA)

This submission included a paper about the volatility of the League of Legends meta-game and used the Riot Games API to back up its hypothesis.

This submission, also a paper, dove into probabilistic analysis and simulation in order to form a predictive model for determining the outcome of a game before it begins.

For What It's URF By orlyzomg (NA) and dbanksdesign (NA)

When building a project that other people can use, documentation is as important as code. This submission caught our eye because of its detailed documentation describing the dependencies, installation, and setup.